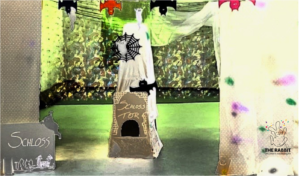 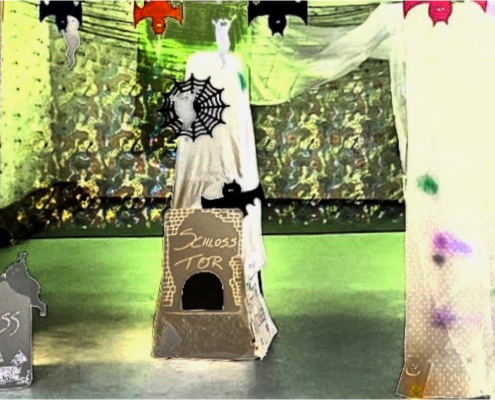 Theatre performances offer a tremendous range of activities, also for those who are not really into actually performing themselves but are keen to be more backstage! Making music, decoration, costume design, being the narrator and plenty more is on offer! Moreover, being part of a theatre performance (after all this is for kids) should allow for ample time for social interaction, laughter and individual creativity.

The Rabbit recently guided a play with 8 kids, aged 9 and 10 years old, as part of a three-hour birthday party workshop. It was fun, creative and the excitement of the young performers just before their big show was electric! Of course the performance was great for all!

You might wonder whether 3 hours are too long or perhaps not long enough?! Before going into details on how to set it up, remember: key is setting your ambitions according to the kids’ age, understanding the needs of the young actors and then planning and preparing according to the available timeframe. One must, however, leave plenty of moments for laughter and individual creativity!

Choosing the right play – less is more! The Rabbit’s blog continues to utter these words, but it is true. It does not have to be pages and pages of text and complicated plots and special effects. Apart from familiarising yourself with the kids’ favourite topic, try to use age-appropriate stories that are humorous and somewhat thrilling. What comes to mind? Funny mix-up stories, or not all-too-scary ghost and detective stories. The Rabbit’s favourite stories are around friendship and community, where at the end of the play the entire cast finds to each other.

You can find plenty of inspiration for how to stage a play in dedicated books. Many give you great details regarding the content of the play, number and age of kids the play is ideal for, overall preparation time, ideas for stage setting and costumes and plenty more. You can always adjust to your needs.

Group acting versus single stars – remember this is a group exercise. You ideally want the kids interacting on stage rather than long monologues. The play The Rabbit chose was about a group of ghosts who were hiding in a castle, scared of the outside world. The passing hikers were afraid of the ghosts in the castle. Naturally at the end they all come together and sing a song, holding hands. The play offered semi-spooky scenes, funny moments, and allowed the cast to find together at the end.

Setting the stage – do not go overboard, use first what you have at home. The Rabbit split the stage into two levels, hanging up two sheets parallel to each other using a string, nails and pegs. That gave a proper centre stage and allowed for multi-layered distances between the actors. Also it was great for the ghosts to hide behind the curtain and to emerge from it (and … and this is a secret… it gave us the opportunity to pin the text on the wall, which was not visible to our audience, in case someone forget their lines). For the rest of the set decoration we used Halloween deco including a table cloth for the back curtain, featuring shiny spider webs which shimmered scarily in the stage light coming off the disco lamp.

Costumes – open up the wardrobes and go wild. Kids love to dress up, and have these amazing imaginations on what their character could look like. For the hikers we used their local folklore ‘Dirndl’ or summer dresses and shorts (and the boys used their dads’ super-big socks which went all the way up to their knees). For the ghosts we used brown wrapping paper, sturdy enough so we could paint on it in black and white. We cut the paper in the shapes of ponchos, easy to put on and move around in. Each ghost and hiker got a name tag in the form of an adjective, as in ‘the fearless’, ‘the quiet’, ‘the explorer’ and so on. The actors chose their names which allowed for instant bonding with their character.

The narrator, special sound effects, costume designer, director… – as mentioned at the beginning of the blog, there is a range of things to do for kids who do not want to act. Special sound effects are great for setting the atmosphere. There are plenty of internet sites which offer free of charge sounds which are easy for kids to download. For our ghost play we had a fantastic screeching door and howling wind for setting the scene at the castle, and a heavy door falling shut to close one scene. We also had a very dedicated costume designer who made sure that all actors were given the right clothes, taking their individualised request into consideration and also making sure they felt comfortable and the outfit would last throughout the play. A very difficult task indeed! And of course there is the narrator! A key role to set the mood which can be supported with its own gadgets. For one of the scene openings we had the narrator sit in front of the stage, with a huge clock showing midnight. For each gong (which was handled by our young sound engineer) the narrator moved the clock by hand. We had the full attention of the audience and it was a fantastic introduction for the next scene! It should be said that the role of the director is a difficult one to fill, really like in real life. In most cases it should be conducted by an adult or older teenager who acts more as a general facilitator.

Guests – kids go to great lengths to welcome their guests. Seating arrangements, tickets, flyers and posters and plenty more is diligently prepared in advance and of course it is expected of all adults to play along! Fantastically kids always allow ‘air money’ and if you are lucky they give you some ‘air change’ back. And remember, the same routine is true for the appraisal after the performance; allow for plenty of clapping and pointing out the highlights.

Free-style theatre – with the upcoming seasonal holidays many kids will indulge in free-style theatre when with friends. Apart from watching your kids perform it also give you an enormous insight into the topics your kids are currently occupied with and how they perceive the world around them. So allow yourself the time, get comfortable and enjoy the play!

The Rabbit wishes you a joyful holiday season, plenty of family time and perhaps you might even want to take part in your kids’ theatre play – The Rabbit is often asked to play the strict teacher – I guess that in itself is worth a reflection!

The Rabbit focuses on providing premium and tailor-made party concepts and organization, striving to provide thoughtful and memorable moments defined by individual needs, traditions and new trends, ensuring that you as parents have ample time to celebrate with your child. Please contact The Rabbit, therabbit@childrensparties.at, for further information. Thank you!

This site uses cookies. By continuing to browse the site, you are agreeing to our use of cookies.

We may request cookies to be set on your device. We use cookies to let us know when you visit our websites, how you interact with us, to enrich your user experience, and to customize your relationship with our website.

Click on the different category headings to find out more. You can also change some of your preferences. Note that blocking some types of cookies may impact your experience on our websites and the services we are able to offer.

These cookies are strictly necessary to provide you with services available through our website and to use some of its features.

Because these cookies are strictly necessary to deliver the website, refusing them will have impact how our site functions. You always can block or delete cookies by changing your browser settings and force blocking all cookies on this website. But this will always prompt you to accept/refuse cookies when revisiting our site.

We fully respect if you want to refuse cookies but to avoid asking you again and again kindly allow us to store a cookie for that. You are free to opt out any time or opt in for other cookies to get a better experience. If you refuse cookies we will remove all set cookies in our domain.

We provide you with a list of stored cookies on your computer in our domain so you can check what we stored. Due to security reasons we are not able to show or modify cookies from other domains. You can check these in your browser security settings.

These cookies collect information that is used either in aggregate form to help us understand how our website is being used or how effective our marketing campaigns are, or to help us customize our website and application for you in order to enhance your experience.

If you do not want that we track your visit to our site you can disable tracking in your browser here:

We also use different external services like Google Webfonts, Google Maps, and external Video providers. Since these providers may collect personal data like your IP address we allow you to block them here. Please be aware that this might heavily reduce the functionality and appearance of our site. Changes will take effect once you reload the page.

The following cookies are also needed - You can choose if you want to allow them: